A Very Potter Post: The Limited Imaginations of Uncle Vernon and Uncle Andrew

My head is wrapped up in Harry Potter these days and for good reason. A couple of weeks ago it was Mother's day and my family watched the first four movies (my wonderful mom actually said, "Harry Potter. Pizza. Cookies. Beer. Yay!"). If that wasn't enough to put me in the mood, I also started re-reading the books in preparation for two things:

Firstly, I'm re-reading the series is because I'll not only be attending this year's Leakycon in Portland, but actually presenting a paper about the Hogwarts ghosts while I'm there! I'm really not the best public speaker, but last year I presented a paper for the first time at Mythcon in Berkeley and managed to be fine. I hope things run at least as smoothly for Leakycon at the end of June. Wish me luck!!


The second reason I started re-reading the series is because of the Harry Potter Book Club that is being run by a few of my favorite bloggers. Jenna St. Hilaire from A Light Inside, Christie from Spinning Straw Into Gold, and Masha from Cyganeria are all reading and discussing the series from the very beginning and invite anyone and everyone to join in. I've been enjoying their posts and would like to encourage anyone who is interested to head on over to any one of those blogs. This re-reading is a bit different than you might expect- as Jenna says in her introductory post: 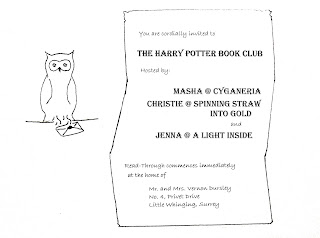 This is not just any thoughtful, playful, highly interactive read-through, either. It's an extensive conversation between three disparately-experienced readers: one longtime Potter fan, one longtime not-a-Potter-fan, and one new reader of the stories. Ideally, it will be intense—and magical—and legendary—and fun.

Start the book club by going here and reading the full introductory post!

Here are some of my own thoughts from reading the first few chapters this time around:
Harry Potter and the Sorcerer's Stone famously opens up with everything the series is not. That is, with the absurdly close minded, boring, just plain awful Dursleys. There is nothing this book series is less about than a boring "firm called Grunnings"(1) or the mindless gossip Petunia overhears by "craning [her neck] over garden fences"(1). The wonderful first sentence, "Mr. and Mrs. Dursley, of four Privet Drive, were proud to say that they were perfectly normal, thank you very much"(1) allows children to immediately pick up on the irony of Privet Drive and must instantaneously beg a response something along the lines of my usual one: 'humph! Are they now?'

I love that throughout this first chapter there is a constant disconnect between what the reader sees and how the Dursleys act. For instance, we're told that Petunia gushes over the fact that Dudley learned a new word, but the narrator humorously tells us in parentheses that that word is "won't!"(6)- explanation point included. The Dursley's are just so blatantly proud that they are never mixed up with anything unusual that they're not just boring people, they are downright smug about being boring: Even as Mr. Dursley gets ready to leave for the morning, we're told, "Mr. Dursley hummed as he picked out his most boring tie for work"(2).
Everything is set up in these first few pages so that, as readers, we are immediately in on the joke. The narrator pokes so much fun at the Dursley's that before we even meet Harry, before we even know how truly awful the Dursley's are, there's no denying it: we're on Harry's side.

These first few pages are also the only time we really get into Mr. Dursley's head. Jenna states that Mr. Dursley is "so completely wrapped up in this superficial life, so shielded from imagination, that despite all the cloaks and owls and shooting stars and cats, neither Halloween nor saints ever seem to come to his mind. It's just another day to the Dursleys." Mr. Dursley does not just ignore his own imagination, he actively shuts it out. He puts up his own shield. When he first notices strange things happening around Privet Drive all his first instincts (to think a cat is reading a map, to think that there are a group of strange people out, and to think that it all has something to do with Harry) are actually all spot on. But Mr. Dursley simply talks himself out of believing what he's seeing. He's a veritable Uncle Andrew. If you've read C.S. Lewis' The Magician's Nephew, you'll remember that Uncle Andrew, along with Polly, Diggory, Frank the cabby (and his wife), and Jadis, is present at the moment of Narnia's creation. While the others are able to hear beautiful music and understand the language of animals, He and Jadis (the White Witch of The Lion, the Witch, and the Wardrobe) cannot and will not understand. The narrator states, "For what you see and hear depends a good deal where you're standing: it also depends on what sort of person you are" (125). Like Mr. Dursley, Uncle Andrew talks himself out believing what he is seeing and hearing:


When the lion had first begun singing...he had realized that the noise was a song. And he disliked the song very much. It made him think and feel things he did not want to think and feel. Then, when the sun rose and he saw that the singer was a lion ("only a lion," as he said to himself) he tried his hardest to make himself believe that it wasn't singing and never had been singing...he thought, "I must have imagined it. I'm letting my nerves get out of order. Who ever heard of a lion singing?" (126).

Mr. Dursley's first encounter with something magical works in much the same way:


It was on the corner of the street that he noticed the first sign of something peculiar--a cat reading a map. For a second, Mr. Dursley didn't realize what he had seen-- then he jerked his head around to look again. There was the tabby cat standing on the corner of Privet Drive, but there wasn't a map in sight. What could he be thinking of? It must have been the trick of the light...he watched the cat in his mirror. It was now reading the sign that said Privet Drive--, no, looking at the sign; cats couldn't read maps or signs (2-3).

Both uncles work hard to disprove or rationalize their way out of believing in something extraordinary, even when they witness it first hand. This moment with Mr. Dursley and the cat (McGonagall) is wonderfully paralleled just a few pages later, when Harry likewise comes face to face with an animal. Unlike his uncle, Harry does not hesitate a moment to believe in what he sees. The snake in the zoo winks and Harry, recognizing the snake's ability to communicate and understand, immediately responds with a wink of his own.

I just don't think I can put it better than the narrator of The Magician's Nephew, who states, "Now the trouble about trying to make yourself stupider than you really are is that you very often succeed. Uncle Andrew did. He soon did hear nothing but roaring in the Aslan's song. Soon he couldn't have heard anything else even if he had wanted to" (126).
That's precisely what Mr. Dursley is in danger of doing and is what drives not only this first chapter, but the rest of the series. The Harry Potter series deals so much with faith (both in and out of a religious sense) because everything about magic asks you to trust in a force you cannot see. Mr. Dursley, who doesn't trust the magical world he actually sees, is the epitome of what happens to someone as 'successful' as Uncle Andrew. Imagination is human nature; if we actively push it aside we become more than boring, we become people who delight in the ordinary, we become just so squeamishly Dursley-ish. And if there's one thing this chapter does, it makes sure we don't want to have anything to do with being "perfectly normal." If this is a book about expecting the extraordinary, bring it on-- we're darn sure ready to believe.