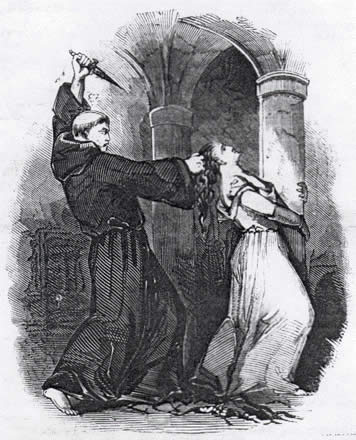 The Monk, Wuthering Heights, Jane Eyre, Frankenstein, The Rime of the Ancient Mariner, and... the Harry Potter series!?

Gothic stories almost always include what Travis Prinzi calls the “superficial trappings” of ghosts, castles, and candles. In Harry Potter’s Bookshelf, John Granger states, “Gothic stories are usually set - obviously enough - in a Gothic manor or castle…probably a ghost or two will show up eventually” (74). The Hogwarts castle is abound with touches of this Gothic scenery. In fact, Harry’s contact with the Gothic happens almost simultaneously with his first arrival at the school. When Harry approaches Hogwarts he sees a “vast castle with many turrets and towers” (SS 111). Once inside, he notices that its “stone walls were lit with flaming torches” (SS 113). Only moments later, “pearly-white and slightly transparent” (SS 115) ghosts glide through the walls of the Great Hall to greet Harry. These traditional features of the Gothic permeate throughout Harry’s time at Hogwarts. Gothic touches such as these are meant to foster what scholar Ann Tracy calls, “nameless fears” and “familiar anxieties” (Bookshelf, 73). A large, poorly lit castle may not be a frightening aspect in and of itself. But such a setting is perfect for producing the essential atmosphere of fear in a Gothic novel. This is a type of fear that is distinguished from something merely momentarily scary. A loud noise in an otherwise quiet moment for instance, produces only a brief moment of fear followed by a sigh of relief. Instead, fear in the Gothic tradition is centered on the unknown. It is something that, as Granger states, “heightens all of your senses, makes you aware of who you are and what you’re all about” (Granger Ch. location 687, par. 30). This type of terror plays a significant role throughout the Harry Potter series. For example, even as early as the first novel, Harry has an extremely Gothic encounter when he meets Voldemort in the Forbidden Forest:

Harry had taken one step toward it when a slithering sound made him freeze where he stood. A bush on the edge of the clearing quivered…Then, out of the shadows, a hooded figure came crawling across the found like some stalking beast. Harry, Malfoy, and Fang stood transfixed. The cloaked figure reached the unicorn, lowered its head over the wound in the animal’s side, and began to drink its blood. (SS 256)

This is exactly the type of nameless fear that the Gothic is all about. Harry becomes paralyzed and completely aware of his surroundings as he watches an enigmatic- but deeply frightening- scene unfold. The dead unicorn and the beastly, yet human-like figure drinking its blood evoke subtle, familiar anxieties of death, dehumanization, and purity.

This is a part of my graduate paper written May 2012: When Gothic Meets Comic: Exploring the Ghosts of Hogwarts Castle  [EDIT] Which I am now presenting at Leakycon Portland 2013!!