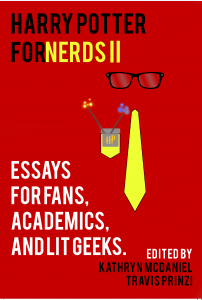 Some very exciting news to share with you all! The newest book of Harry Potter studies, "Harry Potter for Nerds 2" edited by Travis Prinzi of thehogshead.org and Kathryn McDaniel features my essay on the Hogwarts ghosts and their liminal status between gothic and comic traditions (just in time for Halloween!). This book includes some amazing works of scholarship: everything from house-elves, Remus Lupin, dystopian elements, philosophy, quidditch, reverse alchemy, and Native American elements are all explored by some of my favorite fantasy scholars writing today.

I'm particularly honored to be included in this volume because my favorite Potter scholars and fellow mythgardians are a part of it as well: Mythgard Professor Dr. Amy H. Sturgis and fellow students Katherine Sas, Kris Swank, Laura Lee Smith, and Emily Strand all have outstanding essays in this book. If you are a fan of Harry Potter, love studying Literature, or are just a Ravenclaw at heart, I think that you will not only enjoy this book and learn a lot from it, but also be down-right blown away at the ways in which these scholars talk about the series. All the essays are accessible, brilliant work on Rowling's world and the Hogwarts Professor John Granger himself calls it a "seismic event" within Harry Potter scholarship!


"For Serious Readers of Harry Potter, this is essential reading for greater understanding of the Hogwarts Saga, powerful scholarship in conversational language that delivers insight after insight."

My own chapter, "When Gothic Meets Comic: Exploring the Ghosts of Hogwarts Castle" looks deeply at some of the most important--but often overlooked-- liminal characters within the Harry Potter world. The Hogwarts ghosts, it turns out, are complex: they are not only textually in between life and death, but they are also in between two literary conventions: the gothic and the comic. Rowling herself has said that death "is one of the central themes in all seven books." My essay explores how the ghosts, as supernatural beings that are "neither here nor there," have a profound influence over Harry's developing attitude towards death. I really hope you get a chance to read it and the other marvelous and stunning essays that are included in the volume. The book is available both on Amazon and Barnes & Noble!

"To have essays of this depth still coming out…there's more to say still, there's deeper things to say and there's better conversations to be had--and I think this book represents that."

- Travis Prinzi, editor of Nerds 2, and author of Harry Potter and Imagination


MuggleNet.com's MuggleNet Academia recently devoted a whole episode to discussing this book, which you can check out right below:


Psstt! also! Unlocking Press is offering something special for everyone who buys a hard copy or eBook before Halloween. Send your proof of purchase to John at HogwartsProfessor dot com and you will receive a link to the Harry Potter For Nerds members only website, where you’ll have access to free videos and live or recorded discussions with the world’s finest Potter Pundits, which includes a talk with one of my favorite Harry Potter scholars and current Star Wars professor (!!) Amy H. Sturgis!  Woo!

Read more about Harry Potter for Nerds 2 and purchase the book on Goodreads, Amazon, and Barnes & Noble.