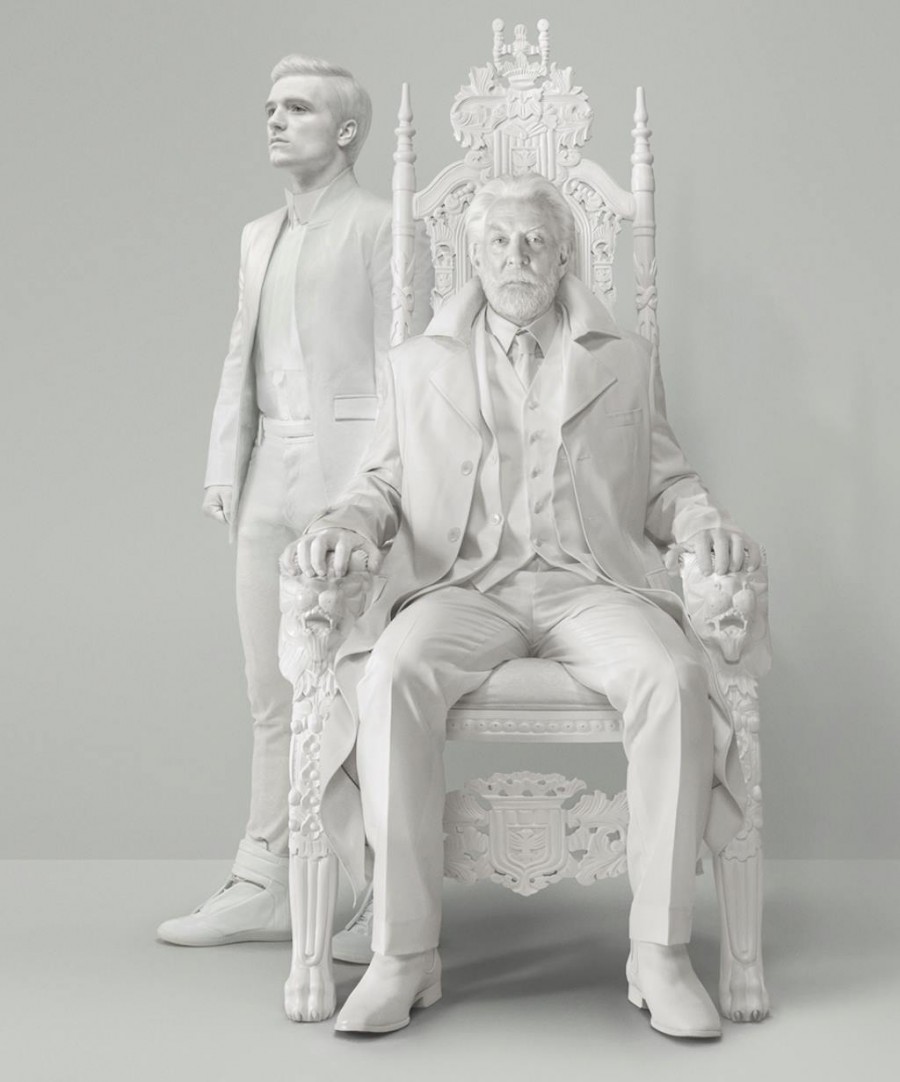 
Throughout The Hunger Games series Peeta is a constant figure of Katniss's Albedo stage. He continually enlightens, purifies, and cleanses Katniss and her albedo moments almost always prominently feature Peeta and vice versa. The Albedo stage, if you'll recall, is often marked with images of water, silver, the moon, and whiteness and even Peeta's appearance is full of white and water imagery. When we first see him in The Hunger Games for instance, he is described as having "blonde hair that falls in waves over his forehead" (25). Likewise, his eyes are blue and as a baker he is associated with white bread and flour and (though maybe not explicitly) a white smock. Katniss' earliest memory of him not only includes "the rain... falling in relentless icy sheets" (28), but also Peeta saving her and her family from starvation by tearing off the black, burnt pieces of bread and throwing her the leftover white pieces (28).


Later on in the first novel, after Katniss learns of the rule change that declares two tributes can win the Games if they are both from the same district, she immediately runs to find Peeta. She finds him near a stream of water so badly hurt that she plunges into to the water in order to pull him in:


"I've got two water bottles and Rue's water skin. I prop them against the rocks in the stream so that two are always filling while I pour the third over Peeta's body…I wash away all the traces of dirt from his hair and skin" (254-255).

Peeta is described as "pale" (255) and "paper white" (260) and his sickness is the first step in helping cleanse Katniss. In the wet, cold cave (another alchemical symbol) she not only becomes aware of her possible real feelings for Peeta ("His hand brushes the loose strands of my hair off my forehead. Unlike the staged kisses and caresses so far, this gesture seems natural and comforting" [265]), she also becomes caregiver, healer, and lover, even if just for a moment.

Perhaps the most significant albedo moment featuring both Peeta and the symbols of water, silver, and whiteness, however is the scene in which Peeta gives Katniss the pearl in Catching Fire:


"But it’s lovely, deep down under the water, like being in a different world. The water’s very clear...Peeta’s just pried open an oyster when I hear him give a laugh. 'Hey, look at this!' He holds up a glistening, perfect pearl about the size of a pea….Peeta rinses the pearl off in the water and hands it to me. 'For you.' I hold it out on my palm and examine its iridescent surface in the sunlight. Yes, I will keep it. For the few remaining hours of my life I will keep it close. This last gift from Peeta. The only one I can really accept. Perhaps it will give me strength in the final moments" (365-366).

This moment, set in the second and most Albedo novel of the series, is all about illumination and clarity. The water is "clear," the pearl "iridescent," and above all, Katniss' resolve and purpose in saving Peeta's life instead of her own is made more clear than it ever:


“ 'Thanks,' I say, closing my fist around it. I look coolly into the blue eyes of the person who is now my greatest opponent, the person who would keep me alive at his own expense. And I promise myself I will defeat his plan" (366).

Peeta is clearly more than just a third figure for the quintessential 'love triangle'. He is an important part of Katniss' Albedo stage and her journey towards finding the spirit. There is no denying that Katniss shares a close connection with Gale. But from his early moments in the woods hunting with Katniss to his eventual leadership role in the rebellion, Gale steadfastly represents the hunter, the killer. Peeta, on the other hand is the baker, healer, and cleanser and is crucial to Katniss's alchemical, spiritual transformation. (I love scholar John Granger's point that "Gale is justice, an eye for an eye, and Peeta is mercy".)

Interestingly, however, President Snow is a figure that is equally associated with white imagery; from his very name, Snow, to his white beard, to the white rose he is constantly associated with, Snow is white all over. This white imagery of President Snow certainly drives home Katniss' albedo stage (it's no mistake that the albedo novel of the series, Catching Fire, opens up with both snow on the ground outside and Snow waiting for Katniss inside). However, it's difficult to examine President Snow's "whiteness" without contrasting it to Peeta's own:

For instance, the first time we see President Snow in The Hunger Games he is described as "a small, thin man with paper-white hair" (71). Two hundred pages later, "paper-white" is exactly how Peeta is described as Katniss finds him suffering from a wound to the leg. While Peeta's paleness represents his vulnerability in the Games and his human mortality, Snow's paper-whiteness is set in the eerie world of the Capitol, where people are "so dyed, stenciled, and surgically altered they're grotesque" (HG 63). Peeta's whiteness amplifies his humanity and natural physical weakness. Snow, however, is a resident and supporter of a world where humans constantly alter themselves physically and his white description represents the turn away from all that is natural in human body.

Furthermore in Catching Fire, Peeta finds a pearl by opening up an oyster. As he offers it to Katniss he solidifies his own salvation and Katniss gains a new resolve on her own selflessness and sacrificial nature. In the same novel, President Snow is also identified with pearls. His pearls, however, come in the form of an overly elaborate wedding dress: "Heavy white silk with a low neckline and tight waist and sleeves that fall from my wrists to the floor. And pearls. Everywhere pearls" (247). Not only do Snow's pearls add to the general pageantry of the Capital, but they also represent the false, orchestrated "love" between Peeta and Katniss. They also become a symbol for President Snow's control over Katniss:

"Johanna Mason actually stops to straighten my pearl necklace. 'Make him pay for it, okay?' she says" (p. 250).


While Snow's pearls show off his intent of playing with and manipulating Katniss, Peeta's single pearl ultimately frees, rather than constrains Katniss as she makes the choice to give up her own life for his. Similarly, while Snow's pearls symbolize all that is fake between Katniss and Peeta, Peeta's pearl is shown in its natural place, and we see it become a moment of true, growing love between him and Katniss.

President Snow's artificiality and his control over Katniss is furthered in yet another should-be natural image: that of the white rose. Flowers in The Hunger Games series are part of the natural, healing world and cleansing characters like Primrose and Rue are named after them. President Snow, however, is constantly associated with a white rose that smells so strongly of artificial perfume that it makes Katniss sick:


The smell of roses and blood has grown stronger now that only a desk separates us. There’s a rose in President Snow’s lapel, which at least suggests a source of the flower perfume, but it must be genetically enhanced, because no real rose reeks like that (CF 21-22)

Snow is forever turning away from the natural world and his white roses, instead of signifying purity of the natural world, promote instead the unnatural, synthetic life. More than that, the white rose symbolizes Snow’s overall obsession with perfection through fabrication and even his own sort of “cleansing.”

"The smell’s very faint but still laces the air. It’s there. The white rose among the dried flowers in the vase. Shriveled and fragile, but holding on to that unnatural perfection cultivated in Snow’s greenhouse" (M 381).

For Snow, the white rose does more than symbolize a cleansing of the world’s imperfections. It cleanses his own. We learn in Mockingjay that in his rise to power, Snow used poison to murder those who might stand in his way and in order to avoid suspicion he drank from the poisoned cup himself:

“But antidotes don’t always work. They say that’s why he wears the roses that reek of perfume. They say it’s to cover the scent of blood from the mouth sores that will never heal” (M 169-170).

Snow’s “cleanse” is ultimately shallow. It is only a temporary solution on the surface. And this sort of false, artificial cleansing is a perversion of the pure Albedo cleansing of Peeta. President Snow and the Capitol strip themselves not only of their natural humanity through physical alterations, but of the intangible qualities that make them human: compassion, love, empathy. And it makes sense that Snow would use the image of the white rose to try to break Katniss:

"President Snow must be wondering how that blood-splattered floor and his roses are affecting me. If he wants me broken, then I will have to be whole" (M 166)

Peeta uses it to help heal her:

“I went to the woods this morning and dug these up. For her,” [Peeta] says. “I thought we could plant them along the side of the house. I look at the bushes, the clods of dirt hanging from their roots, and catch my breath as the word rose registers. I’m about to yell vicious things at Peeta when the full name comes to me. Not plain rose but evening primrose. The flower my sister was named for (M,  381).

While Snow's white rose represents death, blood, murder, and artificiality, Peeta makes it symbolize what it was truly meant to: life, renewal, a cleansing beginning. This trailer for Mockingjay Part 1, portraying the real, natural, cleansing Peeta complying with the artificial and poisoning Snow couldn't more clearly illustrate and foreshadow one of the fundamental themes of the novel: "Real or not real?" Because Peeta's albedo connection to the natural world points to Katniss's own journey, her search for the "real" in a world of "not real." Her journey, ultimately, of finding herself in the natural, peaceful world:

"Tall leaves like arrowheads. Blossoms with three white petals…'Katniss,' I said aloud. It's the plant I was named for. And I heard my father's voice joking, 'As long as you can find yourself, you'll never starve" (52).