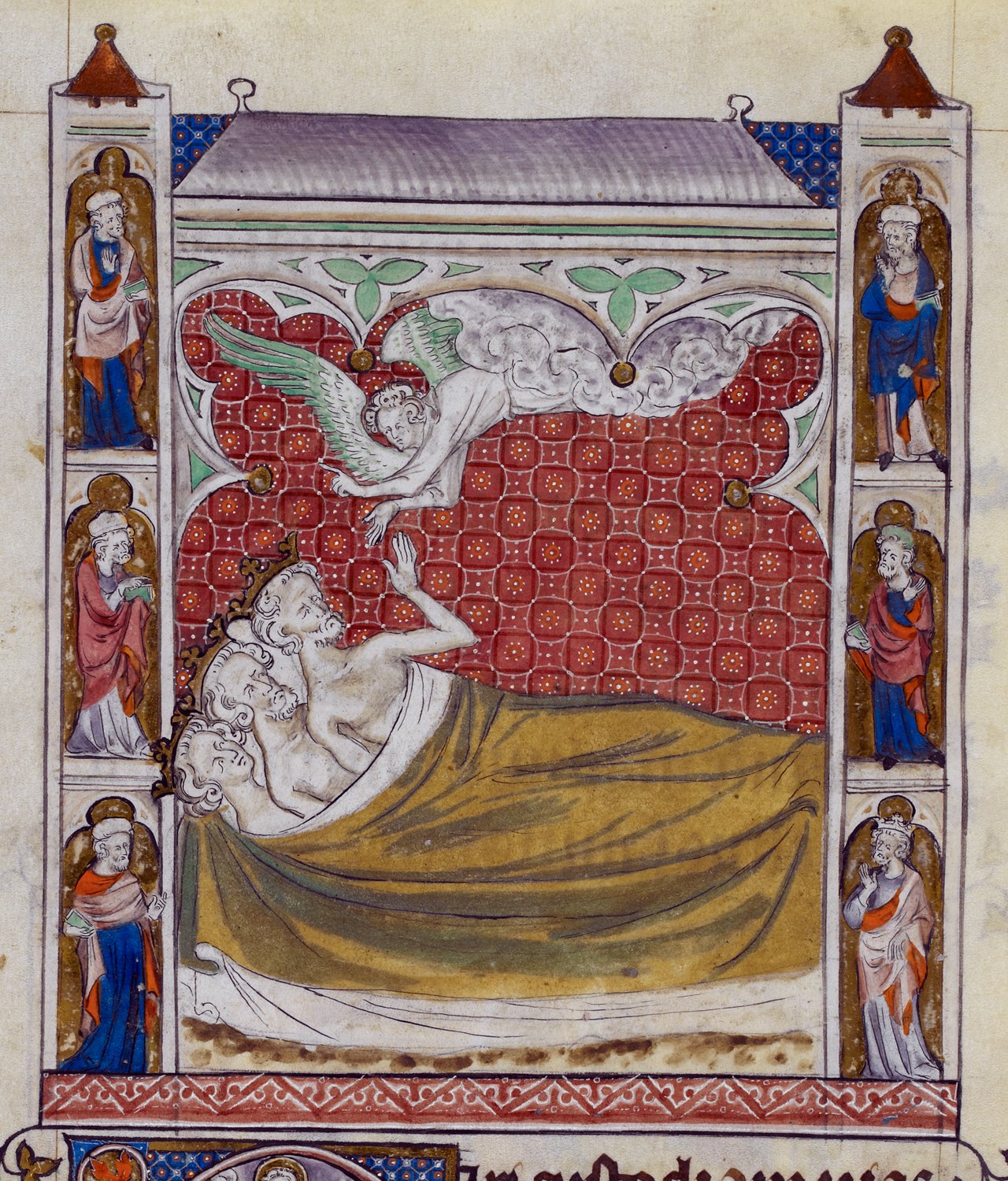 Many of Chaucer’s early poems show a deep interest in dreams and medieval dream theory. Of his early poetry, The Book of the Duchess, The House of Fame, the Parliament of Fowles, and The Legend of Good Women are all in fact framed as a dream vision where the narrator of the poem takes it upon himself to describe and interpret his dream in poetical form. Even Troilus and Criseyde, the only lengthy poem of his earlier works that is not a dream vision includes a discussion of the importance of dreams. However, throughout his early works, it is clear that Chaucer is not just using dream visions as a simple convention of the time, but exploring the value and interpretive difficulty of dreams to examine the nature of interpretation in poetry itself.

In Chaucer’s first major poem, The Book of the Duchess, the narrator is presented as an outsider to sleep, dreams, and interpretation. He is incompetent in all these things, for he opens the poem by addressing his inability to fall asleep, stating “I may not slepe wel nygh nought/I have so many an ydel thoght/Purely for defaute of slep” (BOD, 3-5). Furthermore, throughout the poem the narrator seems unable to grasp the depth of the stories and dreams he encounters. As he recalls his reading of Alcyone and Ceyx he describes being deeply moved, stating, “Amonge al this I fond a tale/that me thoughte a wonder thing” (BOD, 60-61). But after reading this tragic and touching tale, the narrator seems to have been moved only by one thing—learning that there is a god “ that koude make/men to slepe” (BOD, 235-236). Though the narrator seems oblivious to the fact that he has missed an interpretive opportunity in the story he has just read, he soon calls attention to not only the idea that his own dream must be interpreted, but that it is incredibly difficult to do so. In fact, he almost dares the reader to interpret his dream, stating,


Me mette so ynly swete a sweven
So wonderful that never yit
Y trowe no man had the wyt
To konne we my sweven rede (BOD, 276-279)

Thus the reader of the Book of the Duchess is openly put into the position of interpreter. But our position as reader seems also to be specifically aligned with that of the narrator himself. The narrator cannot (or perhaps simply does not even try to) interpret the stories he encounters. Even within his dream, the narrator is unable to understand the black knight, missing until the very end the fact that the black knight is not mourning unrequited love of a lady, but grieving her death. The black knight is forced to leave his poetic and courtly language behind and bluntly shout, “She ys ded!” (BOD, 1309) in order for the narrator to finally understand.

In the Book of the Duchess, the narrator’s inability to understand the stories he encounters is more than just comical—it’s absurd. As readers we are called to question how different we are to this narrator. Are there things simply going over our head? Are we laughing with or at the narrator’s ignorance? Chaucer’s interaction with dreams and poetry here shows us the importance of telling a story that is meant to be interpreted. For as soon as the black knight must abandon his storytelling and his narrative voice, the dream ends. And the narrator, unable or unwilling to interpret this dream, ends his poem just as abruptly, leaving the reader with the responsibility of interpretation.
If the dream in The Book of the Duchess calls attention to the reader’s role to interpret, then the dream in Chaucer's House of Fame (c. 1379) shows the anxieties and fears of the writer of being interpreted. As the narrator opens up the poem he describes how difficult it is to interpret dreams, discussing the different types of dreams and our inability to know exactly why certain dreams come to us. He states,

Here, the narrator recalls the dream classifications of ancient Roman writer and thinker Macrobius, whose Commentary of the Dream Of Scipio was an influential work in the later middle ages. While some dreams are significant or prophetic, others are simple and meaningless and it is difficult to know what to make of the dreams that come to us. In fact, the narrator states “wel worth of this thing grete clerkys/ That trete of this and other werkes/ For I have noon opinion” (HOF I. 53-55). Like the narrator in The Book of the Duchess, the narrator simply does not know how to interpret his dream. This narrator, however calls more attention to his own ignorance. In fact, he seems to highlight the difficulty of interpretation to show just how important it is in poetry. For the House of Fame is largely concerned with what and why the poet writes when he knows that the reader will make his own interpretation. The narrator’s anxieties of how his poem will be interpreted run throughout the poem and his dream vision of the house of Fame demonstrates that one of the most important reasons to write poetry is to, in fact, be interpreted. For in the end fame and reputation are like the whispers the fly through Fame’s halls: “fals and soth compouned/togeder fle for oo tydyng” (HOF, III. 2108-2109). Interpretation of dreams and poetry alike is made all the more important.

It is clear therefore, that one of the most important ways Chaucer uses dreams and dream visions is to explore the nature of writing and reading poetry. In the Parliament of Fowls, the narrator is meant to be simply an observer to his dream and is told by Africanus, “I shal the shewe mater of to wryte” (POF, 168). Yet even in this prophetic dream, the narrator must actively interpret what is going on around him. Even in simply writing his dream down, the narrator is both interpreting his own dream and openly inviting us do the same—he (and the reader alike) is never simply just an observer. This idea is furthered at the very end of the poem when the narrator suggests that the dream has inspired him to read. He declares, “thus to rede I nyl nat spare” (POF, 699). Whether he is reading a book or dreaming in sleep he is actively learning and interpreting. Through the dream vision framework then, Chaucer ensures that readers are aware of their interpretive responsibility. Poetry is not about one writer didactically telling us things we need to know. It is about reading and writing creatively. Questions of where dreams may come from, whether they are didactically prophetic or meant to be interpreted at all, all seems to connect with the way Chaucer uses poetry itself: never as a means to explain something directly to the reader, but to create dialogue and encourage independent interpretation.