If you've read Peter Pan (or are at all familiar with the story) it's hard to watch Wes Anderson's Moonrise Kingdom without thinking about all the Pan imagery going on. The film is not trying to be an adaptation of J.M. Barrie's work- its quite magical and artful all on its own- and it doesn't have any explicit references to Pan. But there are many moments that play homage to the story. Whether fully intentional or completely coincidental, the stories echo each other in lots of ways and I find all of them interesting.
Take what is probably the most obvious and most basic connection between the two: the plot. Both works open with a young girl (the oldest of multiple brothers) and follow her as she leaves her house in pursuit of adventure with a young orphaned boy. Suzy and Sam of Moonrise Kingdom develop an intimate relationship, and though it's always one of a romantic, rather than maternal love, it fuels the plot and actions of the story.
Next is the setting. There may be little in common between a 1960's boy scout camp (the film name for the program is the Khaki Scouts) and the magical world of Neverland, but let's take a look at some of the similarities:

Overall, the setting of both works stands in contrast to their opening, which centers indoors with a family-oriented, domesticated lifestyle.


Next is a list of some similar imagery between the two works. 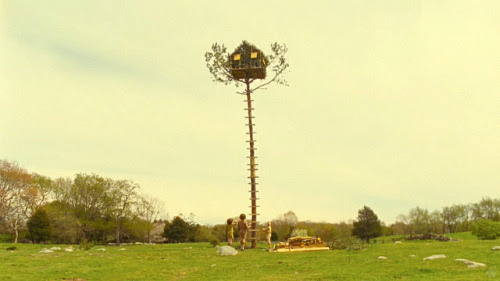 The adventure of Peter Pan begins when Peter, Wendy, Michael and John fly out the Darling window, turn right at the second star, and fly their way to Neverland. There is no flying in Kingdom, but there is a lot of flight and height imagery. 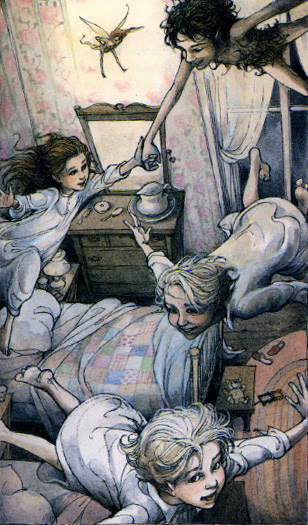 Throughout the film, Suzy and Sam are emotionally earnest and raw in a way that Peter Pan and Wendy never are. They act much older than they are and don't really have any desires to stay children forever. But, that after all, is the film's job. It is a film about the naiveté, precociousness, and wildness of young adults - and no matter what our current age is, Moonrise Kingdom awakens the Pans in all of us.