Making Sense of the Frame Narrative in 'The Princess Bride'

Ah, The Princess Bride. Is there anyone who doesn't love this film? I've watched it for years and my family quotes it almost daily (this really isn't an exaggeration). Somehow, though I always intended to, I never read the novel it was based on until now. I loved every minute of it and even though I know many of the lines by heart, I still couldn't put it down. 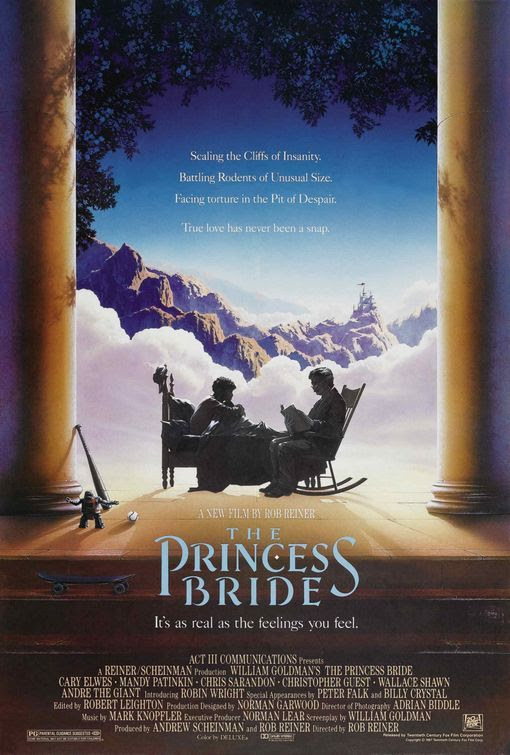 There is one alarming difference between the book and the film that I found surprisingly difficult to make sense of. Anyone coming to the book after watching the film first will notice this difference right away: it's the frame narrative. In the film, the frame is charming and simple and involves only the young boy and his grandfather, who reads the book out loud and occasionally interrupts the story as we see it play out. In the book however, the first frame is much more complicated than that:

The novel begins with William Goldman writing as "himself" (which is in reality a fictionalized, albeit close, version of himself). In it, he talks about his father reading him The Princess Bride by fictional author S. Morgentstern as a child. He goes on to describe his life as it is now and paints a rather sad picture. He is an unsatisfied adult. He has a wife who is a cold and analyzing psychiatrist, and a son who is overweight and an unmotivated reader. After about 25 pages of setting up this sad reality, the narrator (still as William Goldman) talks about returning to The Princess Bride as an adult only to find out that it is a much longer and much more boring story than what he remembers. As it turns out, his father only read to him "the action stuff, the good parts. He never bothered with the serious side at all" (27). The novel in front of us then (the second frame of the book as a whole), is Goldman's annotated and abridged version, the version his father read out loud to him, the "good parts version" (29).

While the frame narrative itself may not be too complex, I think its message certainly is. Think about about the picture this first frame paints: right before we enter a romantic, fantastic adventure tale there is one huge dose of bitter reality. Since The Princess Bride itself is a short and fast passed story, this 30 page long opening seriously stands out. Why does Goldman introduce The Princess Bride, the story that sparked his desire and imagination for adventure, the story he describes as "the single best thing that happened to me" (12) in this way?

On one hand, this opening seems to be a very conscious contrast of what happens in reality and what happens in stories. Right before the The Princess Bride starts, the narrator says:

"But take the title words- 'true love and high adventure'- I believed that once. I thought my life was going to follow that path. Prayed that it would. Obviously it didn't, but I don't think there's high adventure left anymore. Nobody takes out a sword nowadays and cries, 'Hello. My name is Inigo Montoya. You killed my father; prepare to die!'" (27)

There are also moments in the second frame, in the story itself, that echo this sentiment. Inigo states:


"Then let’s look on the bright side: we’re having an adventure, Fezzik, and most people live and die without being as lucky as we are" (234).

If we are to understand an overall moral of the tale, the first frame narrator without a doubt wants it to be: "Life isn't fair" (188). "That's what I think this book is about," (188) he says in his longest annotation in the book, "...and I'm telling you, one and all, you better believe it" (188).  Life isn't fair because William Goldman once imagined his life could be something like his favorite book- but it wasn't. Life isn't fair because the good guys don't always win, or if they do, the bad guys get away with too much before they are finally defeated:


"You better understand this: some of the wrong people die. Be ready for it...forget all the garbage your parents put out. Remember Morgenstern. You'll be a lot happier" (188).

And life isn't fair because true love might be the most important thing in the world (besides cough drops) but the narrator knows that really,"true love, you can forget about too" (29).

This cynical and pessimistic narrator reminds us over and over again that real life just isn't going to be anything like the novel. And if that wasn't enough, his jarring interruptions (or "annotations") throughout The Princess Bride continually remind us that what we're reading isn't 'real': it is a story that was written by somebody a long time ago and is something that is now being read by you. We are not to get wrapped up in the story as we read. Young William's father disapproves of this as well: "it looked like you were getting too involved and bothered" and "you're taking this very serious" (221), he says when he comes to distressing or disappointing parts in the novel. The Princess Bride is just a novel, after all and a silly one at that.

There is a lot of this sort of reality infused the first frame. However, I find it hard to believe someone would write a tale this good, this funny, and this wonderful just to have the overall message be something along the lines of "Books are great, but really, not as great as you think. Also, life's terrible so suck it up." Instead, I think that Goldman could be asking us to look at the nature of stories and novels and to examine our own beliefs about them and how they affect us, not just as children, but throughout our lives. Because here's the thing: In The Princess Bride, happy endings abound. Westley dies but is brought back to life; True love really is more important than anything; Prince Humperdink hears the chilling "to the pain" speech; Inigo finally avenges his father; and Buttercup and Westley reunite through death time and time again.

William Goldman (as the author) is certainly playing with our expectations of 'happy endings' in life, but he is not ultimately warning us against reading books. Instead, he warns against growing out of the novels, of forgetting the impact novels had on your life. Part of the long opening is to show us how significant an impact reading made on the narrator's life, his real life:


"Picture this now: an all-but-illiterate old man struggling with an enemy tongue, an all-but-exhausted young boy fighting against sleep. And nothing between them but the words of another alien, painfully translated from native sounds to foreign. Who could suspect that in the morning a different child would wake? I remember, for myself, only trying to beat back fatigue. Even a week later I was not aware of what had begun that night, the doors that were slamming shut while others slid into the clear. Perhaps I should have at least known something, but maybe not; who can sense revelation in the wind?What happened was just this: I got hooked on the story.For the first time in my life, I became actively interested in a book" (10).

The problem really begins when the narrator stops thinking about the novel, when he forgets about how important is was to him:


"My whole life really began with my father reading me the Morgenstern when I was ten... I knew I was going to share it with my son. ...When Jason was born, I made a mental note to buy him a copy of The Princess Bride for his tenth birthday.

For the narrator who hasn't read his favorite book since he was a child, who has forgotten something so important to him, of course there's no "high adventure left anymore." Of course what happens in books is not what happens in our 'reality' -  but isn't that why novels like The Princess Bride are so important? Adventure, if we let it, happens right here, in our very hands. The narrator's fault isn't in thinking his life would be one way and having it turn out differently, it's his refusal to acknowledge that his life already has been, and can still be an adventure. If the most important idea the first frame narrator suggests is "life isn't fair," I think that The Princess Bride as a whole shows us a greater one: adventure should never become something unimaginable, something unbelievable, something inconceivable.

Email ThisBlogThis!Share to TwitterShare to FacebookShare to Pinterest
Labels: Storytelling, The Princess Bride